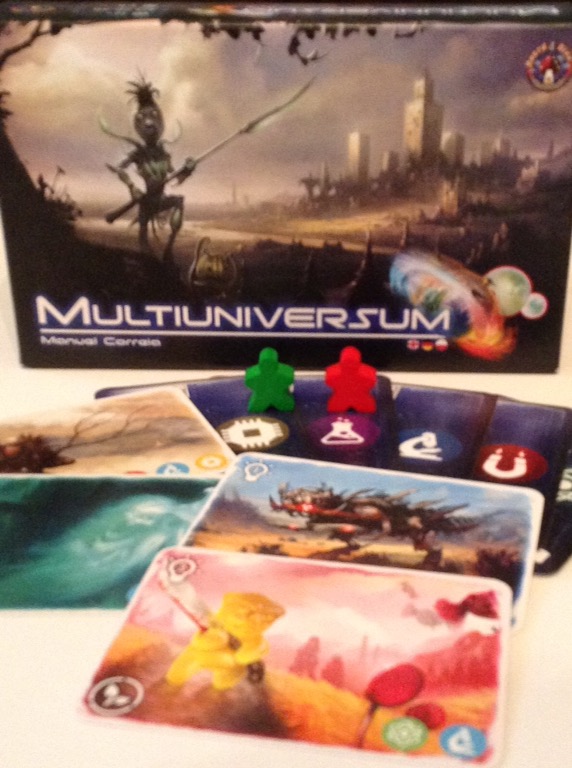 To quote from the back of the box…

What in Einstein’s name happened?! Why so many portals opened all at once?!  … WHAT ARE THESE CREATURES ?! AND WHY ARE THEY SWALLOWING DR. FERGUSON?!

Aside from the sometimes too-literal translation into English, this game is an absolute gem. Up to five players head-to-head or one solo hero, battling to close portals using the resources that come to hand.

After a couple of rounds the game play becomes fluid and the trade off between banking a resource for its value or using it to advance your immediate cause becomes a tricky balance to maintain. Add to this the differing difficulties of the monsters, their points value and domination bonuses, and you end up with a very playable and enjoyable half hour.

The box says up to forty minutes, which is accurate for the first few plays, but after a while it really takes off. It’s also very pleasant to find a game which kicks monsters back to other dimensions using science rather than violence.

No, it’s not one of our games, but we spotted it at the UK Games Expo and we like it. You can find out more at Board and Dice.

Walsall is a small town in the Black Country on the edge of Birmingham. It's full of innovative people doing rather cunning things in engineering, tech, and all manner of other trades. There's a creative streak too, with small theatres, independent book and craft shops, and a vibrant café culture if you know where to look.

If you don't know where to look, ask us!